It looks like you're new here. If you want to get involved, click one of these buttons!

Did the Post-Crash Bull End In August?

The first shows the duration of the entire bull market from March '09 through about a week ago.

What concerns me is the trend line that draws from the March 09 low through the late summer '11 lows. Extending that trend line into 2015, it was clearly broken with the break in August. Subsequent action brought a lower high that peaked just below the extended trend line, and then a series of lower highs before the break in January (which appears to have been contained on the downside by the August/October lows. 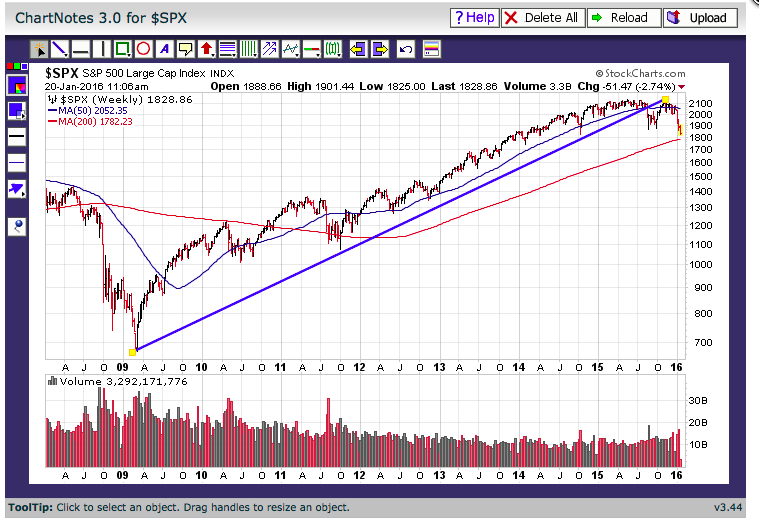 I realize that this is a simplified analysis, but it sure looks to me like the sort of thing that one might look back on with the benefit of 20/20 hindsight and say, "yup, that was a top, and that was break, and that was the end of that long-term (but perhaps not secular) trend.

As if to underscore that assessment, here's another chart that shows the major action since 1996. That includes the top/bear market in 2000-01 and the top/bear market in 2007-09. I haven't drawn a trend line for the 200o top, but look at the line/break in 2007. It looks (disturbingly?) similar to the break and bounce we recovered last year. And you see what happened after that... 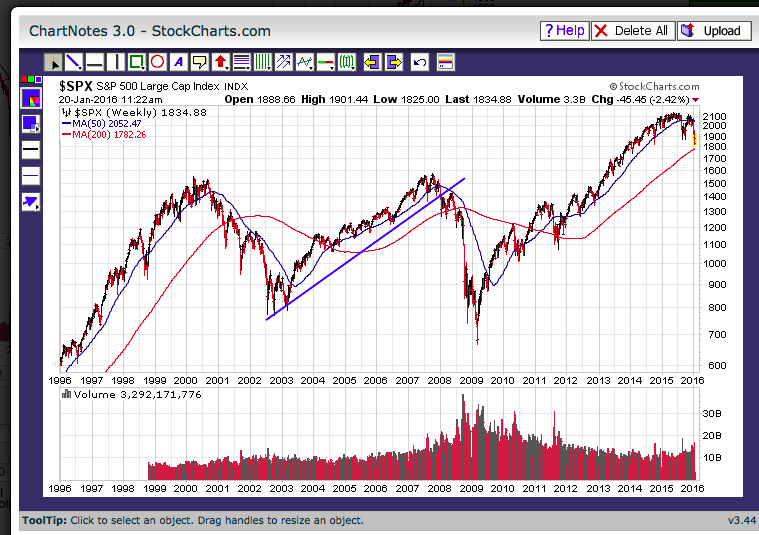 I've got another chart somewhere that draws a horizontal line across the 2000/2007 tops, which suggests to me that a reasonable expectation is a return to/test of that "broken-resistance-becomes-support" level, perhaps before a continuation of a secular bull after a period of retraction and, who knows, maybe a somewhat over due recession.

There's probably an argument to be made as well for the cycles we see here... it was about 6 years from the first top to the second, and it's now been 6+ years since the second...

I just wonder if anybody else sees these patterns, or if there are other indicators that might be used to confirm or challenge this thesis.

Thanks in advance for any input or feedback.

My handle is driver49, my name is Paul.